chat18The Palmer Lab focuses on examining contraction and relaxation function in cardiac muscle. While contraction function is clearly important for the heart to effectively drive blood through the vasculature, relaxation function is just as important to assure filling of the heart chambers with plenty of blood. We apply several different techniques to examine the influence of calcium regulation and myofilament performance in cardiac muscle function, and we apply these techniques to various muscle systems including insect flight muscle, isolated cardiac myocytes and cardiac biopsy samples taken from patients undergoing cardiothoracic surgery. 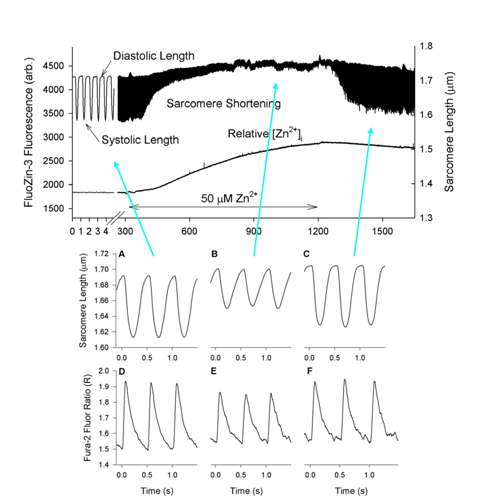 Zinc content in the serum and/or heart is abnormally low in humans with heart failure or other conditions such as diabetes, hypertension, coronary artery disease or myocardial infarction. Amazingly, cardiac zinc content positively correlates with ejection fraction in humans with coronary artery disease (r=0.428, P<0.05; Oster et al. Eur Heart J. 1993). Elevated cardiac zinc status also preserves cardiac function in the face of oxidative stress associated with ischemia/reperfusion or diabetes. Zinc most likely provides cardioprotection and improves cardiac function through its effects on Ca2+ regulation, myofilament force-production and/or proximal second messengers. It has also been suggested that zinc can act as a messenger of gene expression.

Our laboratory focuses on the effects of cardiac zinc status on Ca2+ regulation, myofilament function and gene regulation.

Through simultaneous detection of the intracellular concentrations of Zn2+ and Ca2+ in cardiac myocytes, we (namely Ting) are able to examine Zinc and Calcium Regulation in Cardiac Myocytes Examplethe interaction between Zn2+ and Ca2+ regulation in heart muscle. See the accompanying figure, which demonstrates how Zn2+ affects cardiomyocyte performance. Surprisingly little is known about cardiac myocyte regulation of Zn2+ or about its interaction with the Ca2+ regulation. Almost all that is known is that extracellular Zn2+ passes readily through the sarcolemmal L-type channel and competitively inhibits the inward Ca2+ current. Relaxation function after extracellular Zn2+ removal, however, remains enhanced and cannot be explained by effects on inward calcium current. It appears then that Zn2+ competes for or modulates the function of other Ca2+ regulatory proteins. We (Ting again) are testing the hypothesis that [Zn2+]int improves cardiac diastolic function by lowering Ca2+ load in the sarcoplasmic reticulum and/or enhancing Na+-dependent Ca2+ efflux, thus ultimately lowering total intracellular calcium content.

Our colleague Dr. Stefan Vogt at Argonne National Laboratories measures the spatial distribution of zinc in single cardiac myocytes. This work is particularly important as it provides a direct measure of the interaction and displacement of cardiac calcium by zinc.

We (Yuan and Brad) examine cardiac myofilament function to characterize calcium activation, force production, load-dependent shortening velocity and acto-myosin crossbridge time-on. Cardiac biopsy samples are taken from human epicardium during cardiothoracic surgery. In close collaboration with our colleague Dr. Martin LeWinter, our data regarding myofilament function are then used to identify myofilament-based mechanisms of cardiac function specific to patient sex, age, body-mass index, disease and other conditions. We have published, for example, a set of data showing that myofilament performance is reduced in females with diabetes, but not in males with diabetes.

We (Yuan and Maria) have undertaken the study of cardiac zinc status on the development of left ventricular hypertrophy due to experimental pressure overload. The data are pouring in, but it will take time to collect it all and then analyze. Come back at the end of 2009 for a possible update.